All Collections
Installation, Activation and Licensing
Licensing
LicenseToGo - How to Use Your ARES License on Several Computers (Valid for ARES Versions from 2012 to 2016)

C
Written by Christian Kramer
Updated over a week ago

LicenseToGo - How to Use Your ARES License on Several Computers

LicenseToGo was first introduced in ARES Commander Edition 2014 SP2 and further enhanced in ARES Commander 2015. This feature allows you to work with the same license on other computers. It is available on the Perpetual license and Annual Plan for the duration of your Graebert subscription (see after) but not available on the Flex licenses (network licenses) where it is replaced by another mechanism that is quite similar (borrow a license from the network).

LicenseToGo is like a joker to use your license on another computer. You will enter the same Product Key but in a new computer and it can be under a different OS because we support Windows, Mac or Linux. LicenseToGo will allow you to work on this new computer after checking two things by connecting to our License server:

If the check is OK then you no longer need an Internet connection. You just need to define for how long you want to use LicenseToGo between 1 and 5 days. When LicenseToGo expires you can use it again on the same computer (another 1 to 5 days, following the same procedure) or use LicenseToGo on another computer.

As a result, LicenseToGo is not only allowing you to use the same license on a second computer but on as many computers as you want, from any OS (Windows, Mac or Linux). The only limitation is in fact that LicenseToGo can only be used on one computer at a time.

Using LicenseToGo to work with ARES Commander on a new computer is very easy. All you have to do is to download from www.graebert.com the setup corresponding to your OS to install ARES Commander on the new PC. Then when you launch the software you will see this startup dialog and you will use the third option to enter your Product Key and define the duration. (The startup dialog is shown it the attached image.) 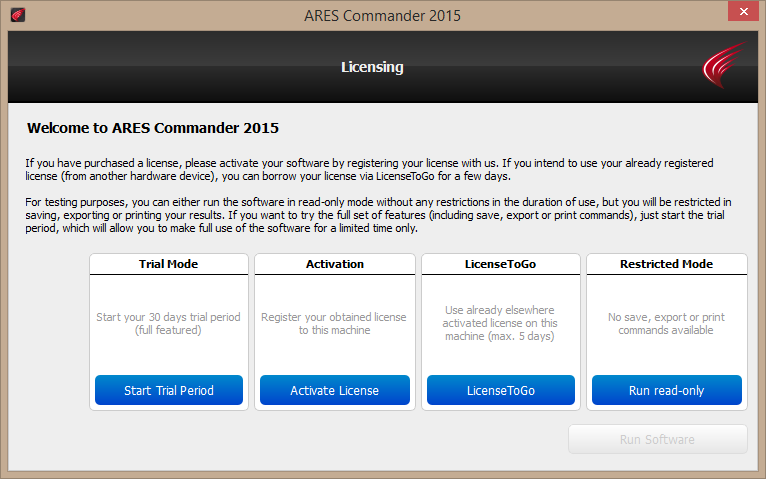