How do ARES® Commander CAD features compare with AutoCAD® or other alternatives? Does Graebert provide any comparison table?

Written by Cedric Desbordes
Updated over a week ago

How to compare ARES Commander with AutoCAD or other CAD software?

If you browse the Internet you will frequently find comparison tables listing features and shiny green ticks. But the truth is that such tables do a poor job of answering efficiently the fundamental question that the customer is asking.

Making a full benchmark would require tens of pages and would be hard to read and update. Any benchmark you see over only one or two pages cannot be more than an advertising flyer ignoring most of the commands and emphasizing only the sales pitch of the CAD vendor.

This is why we stopped providing such comparison tables. You will find instead below an article emphasizing the strengths and weaknesses of each solution in a more comprehensive and detailed way. We hope it will help you to make a more educated choice. If you have already experience of working with AutoCAD you may also simply try ARES Commander and make your own opinion:

Before getting into the pros and cons, the fundamental points to feel safe about the migration from AutoCAD to ARES Commander are:

1.1 ARES Commander is offering the highest compatibility with AutoCAD

Indeed, both CAD software are simply using the same DWG file format. There is no conversion and therefore no loss of data when files are shared between ARES Commander and AutoCAD users.

Other file formats supported by both software include DXF, DWS and configuration files such as .ctb, .stb, .shx, .mln, .dim or .pcx (aka .pc3 in AutoCAD)
Both software are also able to import or attach DGN files, export to PDF and convert PDF back to DWG.

The n°1 alternative to AutoCAD

Graebert's CAD technology represents the second largest installed base after AutoCAD only. Millions of professionals are working with CAD software powered by ARES.

This includes, for example, three of the top 5 construction groups in Japan (Obayashi, Takenaka and Taisei). Besides, ARES Commander is available in 14 languages.
=> Read more about Graebert's 40+ years history in CAD:

Users who are familiar with AutoCAD can instantly switch to ARES Commander without additional training.

Users transitioning from AutoCAD can even use the same keyboard shortcuts and commands given that aliases have been defined to match the ARES commands when they are different. The user interface is also significantly the same and we recently added an alternative ribbon workspace named "CAD General" to facilitate the switch for users coming from AutoCAD. We also provide a manual for beginners who have no experience with CAD.

2. What AutoCAD has eventually better than ARES Commander?

NB: These arguments are true only for the full AutoCAD, not for AutoCAD LT that doesn't include the following features.

AutoCAD is a robust solution. To be fair, the three key arguments in favor of AutoCAD are:

2.1 AutoCAD has the specialized CAD toolsets

The subscription of AutoCAD is now including access to AutoCAD Electrical, AutoCAD Architecture, AutoCAD MEP, and some other verticals.

If you are interested in 2D Mechanical Design you may take a look instead at ARES Mechanical. Graebert has also developed ARES Map for GIS users looking for a CAD package working in synergy with ArcGis Online from Esri.

2.2 AutoCAD has a larger ecosystem of third-party add-ons

If you have developed internally your own routines in Lisp, Visual Lisp, or C++ they can easily be migrated to ARES with few or no modifications to your source code.

But there is also a very large catalog of add-ons that are available for AutoCAD and most of them would not work with ARES Commander unless their developers would create a version for ARES. Consequently, if your users need absolutely to use a specific plugin it could be a restriction for them to switch to ARES.

Note: The very large majority of users work with AutoCAD standalone without any add-on so the impact of this is usually limited.

Graebert is also offering a number of third-party plugins for a variety of needs such as real-time rendering, 3D point clouds, architecture, electrical, HVAC... etc.

ARES Commander includes a full set of 3D Solid Modeling features powered by the ACIS 3D solid modeler of Dassault Systèmes. Yet AutoCAD is going further in 3D with for example the ability to import and export IGES and STEP files.

Note: Users that are working frequently in 3D would, however, prefer working with other solutions such as Inventor, Solidworks, Rhino, Revit, ArchiCAD... because 3D modeling calls for a different approach with assemblies, smart 3D objects, and parametric tools. DWG format and AutoCAD are mostly aiming at 2D drafting.

Yet, if you like to compare we invite you to watch this series of videos about 3D Solid Modeling features in ARES Commander:

SEE VIDEOS ABOUT 3D IN ARES

3. Finally, the key question is also how ARES Commander is better than AutoCAD or other AutoCAD alternatives?

3.1 The business model and licensing

AutoCAD is only sold as a subscription (term licenses of 1 year, to be renewed every year). Autodesk stopped selling perpetual licenses and even decided recently to stop selling network licenses.

ARES Commander offers a very flexible approach and a cost significantly lower than AutoCAD (frequently 6 times cheaper depending on the regions):

a) License types: You can buy Perpetual licenses, Network licenses and even term licenses (subscriptions) of 1 or 3 years

b) Upgrades and subscription renewals: Each Perpetual license includes 1 year of subscription (maintenance) for free. In case you don't want to renew the subscription every year you can always buy an upgrade later, even if it is many years after.

c) Work from multiple computers: Each user gets a Graebert account with a login and password that allows him to work virtually from any computer. The license is following the user and there is a tolerance for up to two simultaneous computers for the same user (eg one PC at the office and one laptop on the go) to avoid to constantly log in / log out from each device. Of course, the user can work on a third or more computers if he logs out from one of the first computers he used. 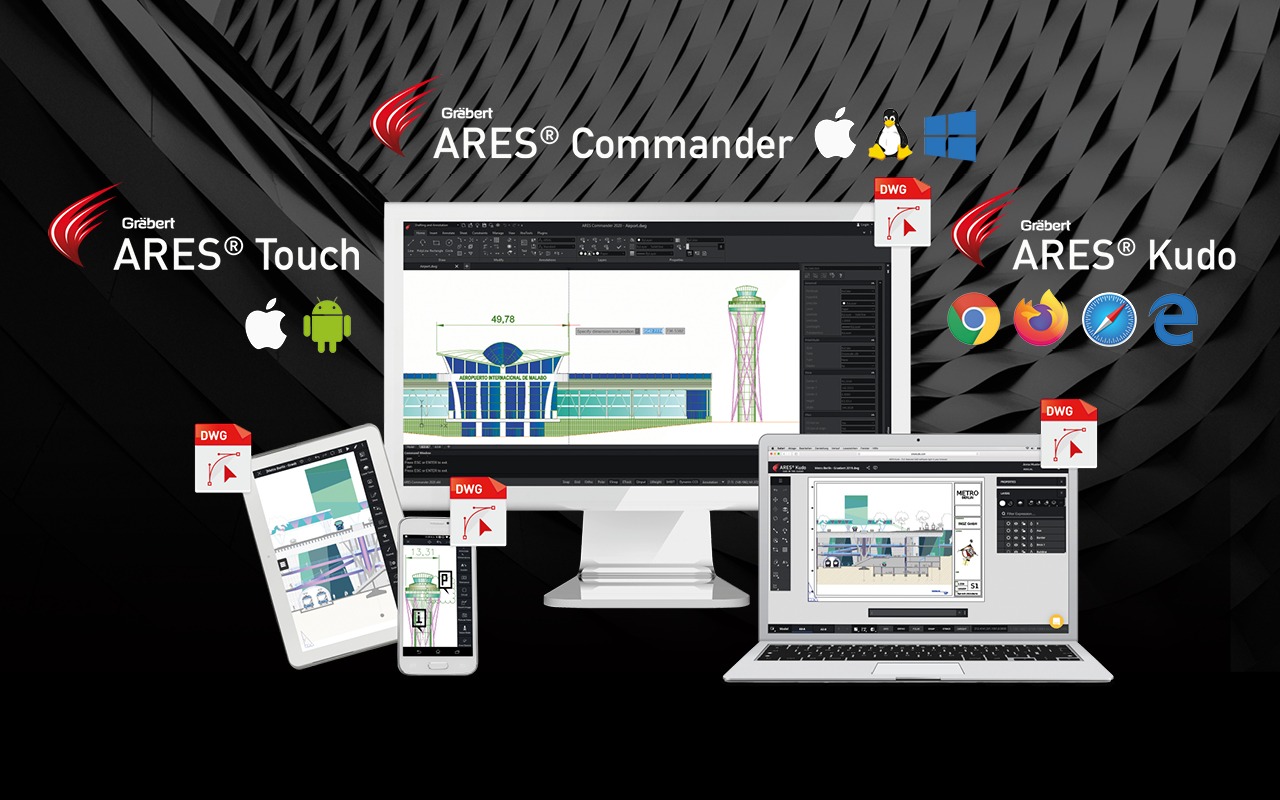 In addition to the features traditionally replacing the AutoCAD features, Graebert has massively invested in R&D to significantly improve productivity and collaboration.

a) Additional productivity features that don't exist in AutoCAD
Work faster and easier with the most frequently used commands. Click on the links below to see some videos:
Power Trim, Dimensions palette, Quick Modify, Mouse gestures, Heads up toolbar

b) Other advanced features that don't exist in AutoCAD
- BIM features: ARES Commander ambitions to be the best solution to document BIM projects with best-in-class DWG drawings. Click on the links below to see some videos:
BIM Navigator: to import and filter IFC and RVT files - Read BIM Object properties - Extract BIM data to tables or Excel
- Maps features: Professional Maps including satellite images and street maps with geo-referencing (requires to stay on subscription)

c) Modern DWG editing leveraging mobile and cloud to improve collaboration workflows between users at the office and the users working remotely or on-site.

3.3 Possibility to customize for large accounts

If you are considering having 100 users or more you could be interested to learn about our ARES for Enterprise features. Even more than our innovations what makes the difference with large accounts is our ability to customize ARES. Some examples include:

a) Authenticate users with a third-party single sign-on (SSO) technology such as the Microsoft Active Directory Federation services - Users would log in to our products with this solution instead of using a Graebert Account.

b) Integration with your file storage systems: Admins can define which storage their users should use including local file servers (via WebDAV protocol) or secure access to Google Drive, Box, Dropbox, OneDrive for Business... etc.

c) Restrict user rights on specific features to increase security according to your organization requirements: some features can be disabled

In hopes this helps to clarify,